PACFI began their annual funding of CF research in the early 1990’s. It was important to look for progressive researchers who were not heavily funded by the National Institutes of Health or the CF Foundation because PACFI believed there were many researchers doing important work who were not receiving needed funds.

For example, PACFI has funded research on oral glutathione, an anti-oxidant, for many years and the organization was credited with this support in a 2015 research article in the Journal of Pediatric Gastroenterology and Nutrition. The national CF Foundation is considering further research in this area, and it is hoped that further studies will prove the efficacy and cost effectiveness of oral glutathione as a long term beneficial treatment for CF.

PACFI received the President’s Award in 2010 from the University of Minnesota for many years of funding cystic fibrosis-related diabetes (CFRD) research. The University has one of the best CF Care Centers in the country and has a collaborative relationship with the world-famous Mayo Clinic.

With the inception of the Million Dollar Bear campaign and Burke’s Tour in 1997-98 along with donations and fundraiser monies, PACFI has allocated over $700,000 to CF researchers. 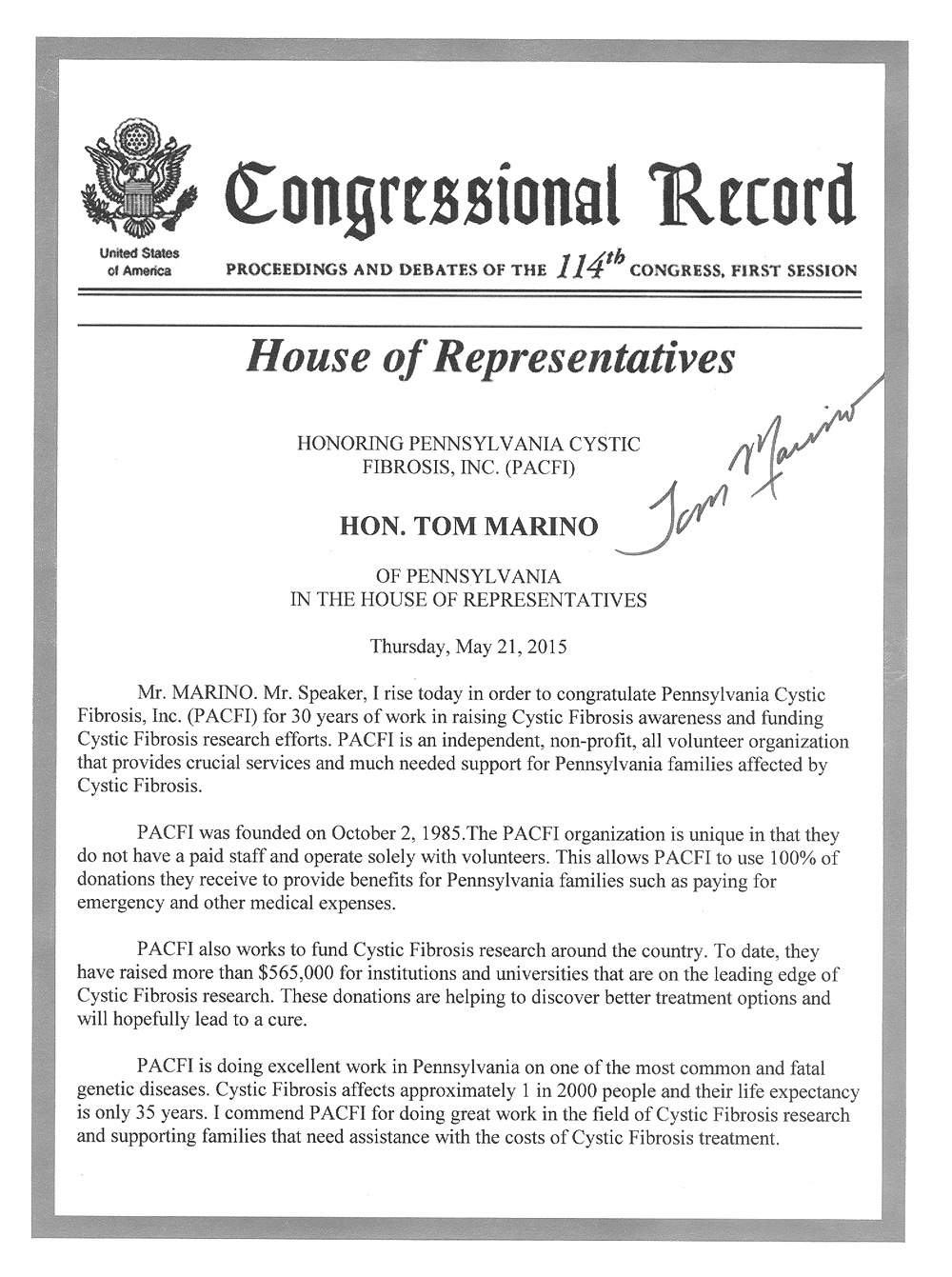 PACFI provides "seed money" to enable researchers to prove their hypothesis and later apply for larger grants to the National Institutes of Health, the Cystic Fibrosis Foundation, or another funding organization.

PACFI generally receives several funding requests annually, and the amounts awarded are generally in the $10,000 to $30,000 range.

We (PACFI board members) will notify each applicant of our funding decision no later than December 20th.

Thank you for your interest in wanting to secure better treatments and an eventual cure for CF!

If you're interested in PACFI funding, please submit the following information no later than November 15th:

Researcher thanks PACFI for $3M gift

“Researchers like me depend on organizations like Pennsylvania Cystic Fibrosis, Inc. (PACFI) to provide ‘seed money’ to test their hypothesis and provide supporting data for major National Institutes of Health (NIH) grant applications,” said Victor Laubach, Ph.D., and Professor of Surgery at the University of Virginia, “and I am happy to report that I have been successful in turning PACFI’s ‘seed money’ into two NIH grants this year in the amount of over $3 million.”

The NIH, as the major funding source for academic research in the United States, also funded two related grants involving imaging studies to check injury after transplant and to check causes of vascular inflammation after transplant.

“We gave $44,000 over the course of three years to Dr. Laubach’s lung research efforts,” Logan Roush, PACFI president said, “and to think that our funding gave him the research information he needed to gain over $3 million in NIH funds to pursue his research further is an incredible accomplishment for our PACFI members and all the volunteers, businesses, and organizations supporting our efforts to beat this disease.”

Roush, who has cystic fibrosis (CF) and diabetes, is excited about Laubach’s work because he is being considered for a double lung transplant in the near future.

Laubach’s research efforts are aimed at keeping donor lungs viable for transplant for up to 24 hours which will enable many more lives to be saved.

Currently, donor lungs must be transplanted within six to eight hours in order to function well, and even then there are the usual dangers of infection and / or rejection of the donor lungs.

“If successful, our studies will demonstrate a novel therapeutic strategy for the prevention of lung reperfusion injury after transplantation as well as provide a means to enhance the rehabilitative potential of ex vivo lung perfusion (EVLP) which concerns the removal of an organ and keeping it viable by pumping fluid into the organ or tissues,” Laubach said. “The eventual translation of these methodologies into humans will greatly increase the size of the donor pool, thus saving the lives of many more CF patients and others with lung disease that are on the lung transplant waiting list.”

Laubach has been studying lung transplantation at the University of Virginia since 1996.